Here are a few alpaca facts for those new to alpacas.  This is simply general alpaca information, and comprised mainly of answers to the questions that we get most frequently on our alpaca farm.

Alpacas are members of the camelid family, along with llamas, vicunas, guanacos,  and camels. Alpacas originate in South America, mainly Peru, Bolivia and Chile.

Alpacas were first imported into the United States in 1984.

There are 2 breeds of alpacas, suri and huacaya. 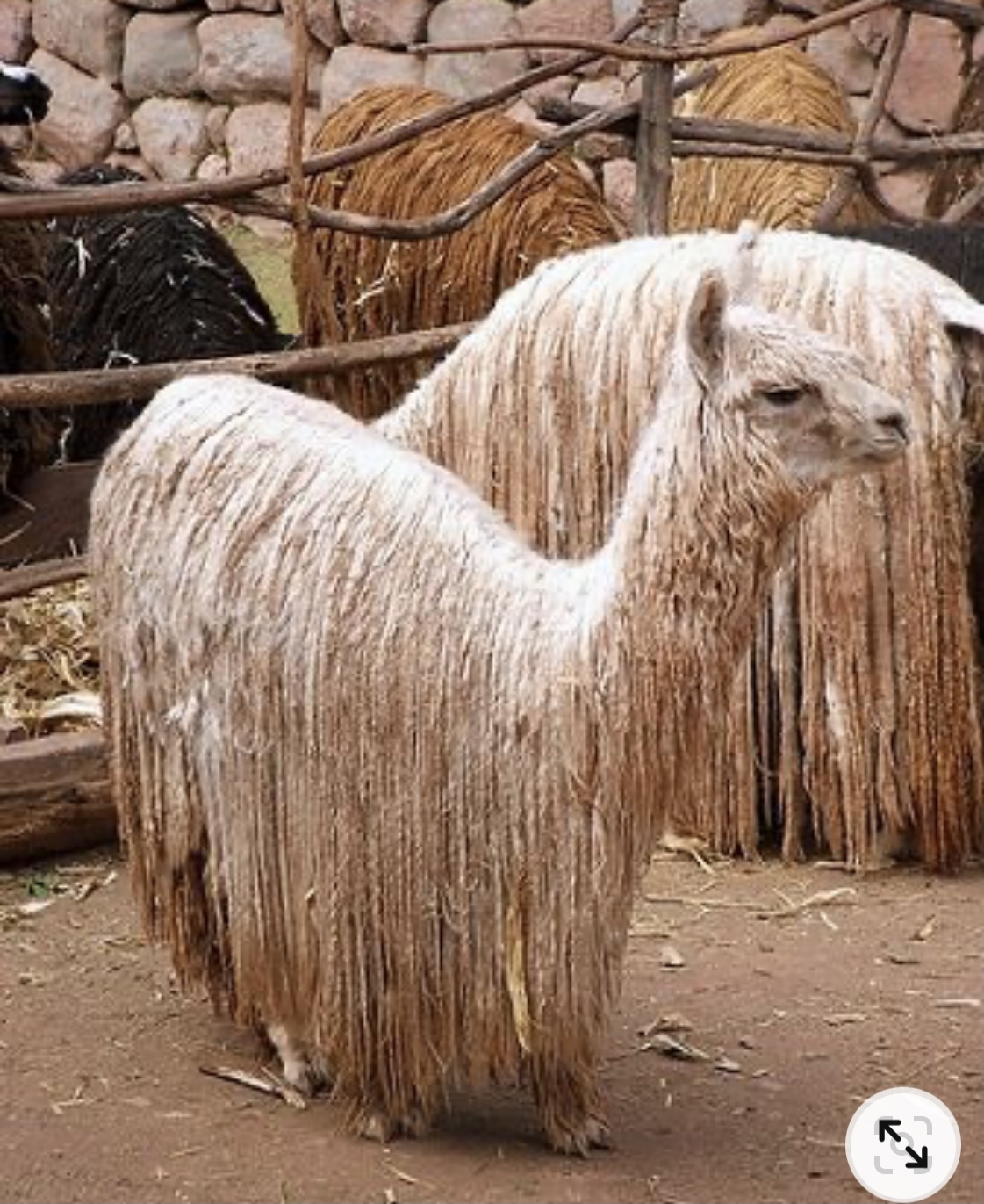 Suris have fleece that is organized into locks that get very long and flowing.  Their fleece drapes down over their body. Suris are often only shorn every other year. Suris make up roughly 10% of the US alpaca population 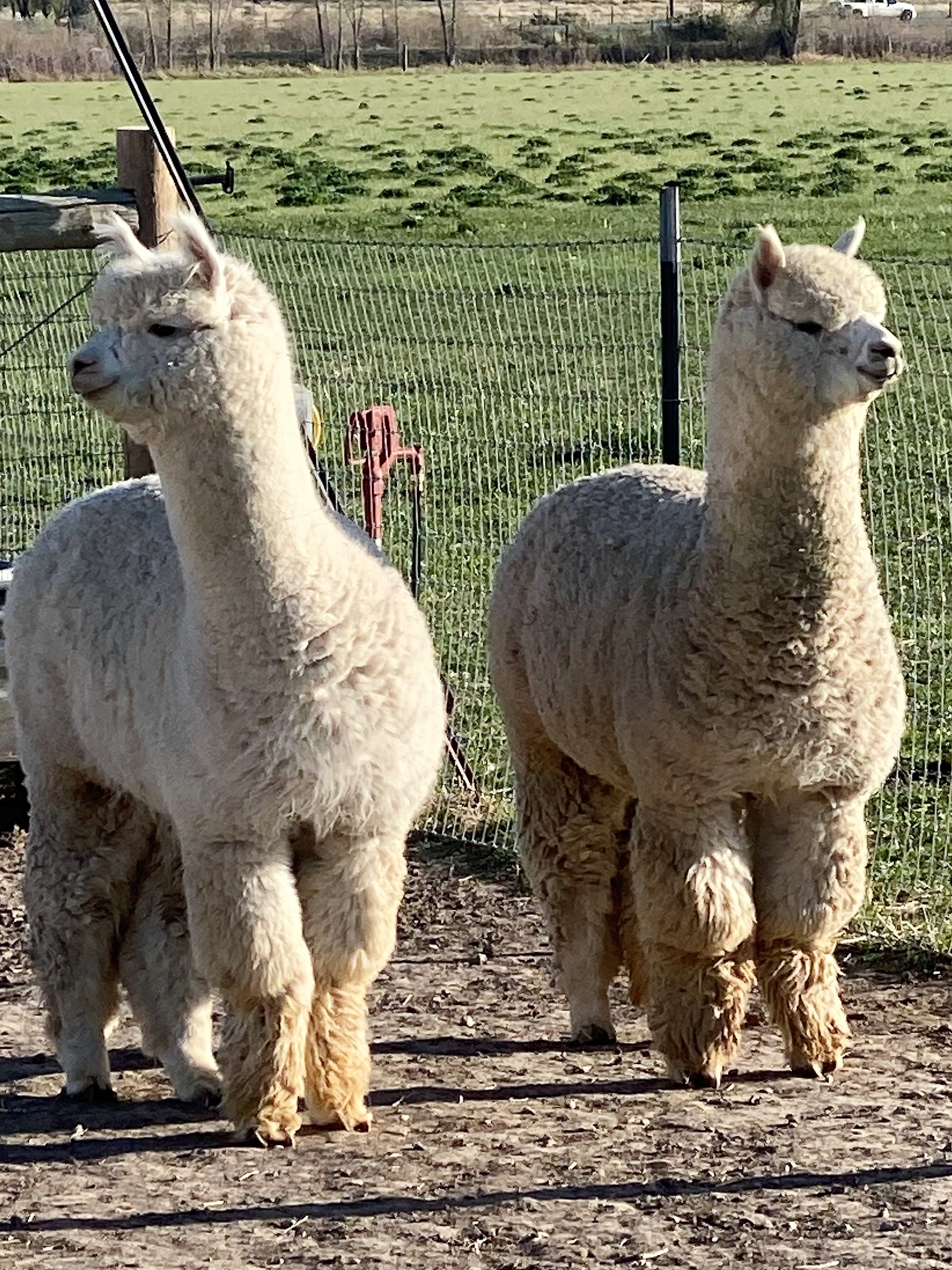 Huacayas appear more fluffy.  Their fleece is organized into staples that are shorter than suri locks.  Huacayas are shorn every year. The vast majority of American alpaca breeders breed huacayas.

In actuality, huacayas make up over 90% of the US alpaca population.

In general, alpacas are intelligent animals.  They are curious, endearing and, like people, each has it's own, distinctive personality.

They are relatively easy to train, docile, generally safe and pleasant to be around. They do spit when they are angry or agitated, but rarely get angry at people, unless you're messing with their cria.  However, humans often get caught in the crossfire, as people are hand feeding the alpacas.  They are trying to fend off the competition for the pellets, and can be very directly challenged, lol.

They don't usually challenge fences, although they will rub on fences, so your fencing still needs to be sturdy.

Of all the interesting alpaca facts, this one may be the most important, Alpacas have very unique antibodies  called nanobodies that block, or inhibit viruses from entering normal, healthy cells, thereby  preventing  infection.  These nanobodies are being researched for a possible treatment for COVID-19, as well as other viruses like MARS. Research is ongoing in various parts of the world including the US, the UK and down under.

Camelids have elliptical red blood cells,  This is quite rare and may, in fact be limited in mammals to the camelid family.

Among the more interesting of alpaca facts is that alpacas and other camelids are self induced ovulators.  What this means is that the act of breeding is what actually makes an alpaca ovulate.  This is a valuable trait for alpaca and llama breeders, as you don't have to wait for them to go in heat.  You can breed them any day of the year, if they're receptive (usually receptive at least every 3rd day, as they produce an optimally sized follicle roughly every 3 days, which will cause them to be receptive).  After they have been bred, they ovulate (release an egg) into the sperm, which is viable for roughly 48 hours.

The value in this, is that it allows breeders to plan the expected due dates of their crias (babies).

Alpaca babies are called crias, and are generally born weighing between 15 and 20 lbs.  At Sopris Alpaca Farm, we weigh every cria as soon as it is dry, and have recorded birth weights rainging from as little as 9.9 lbs up to a hefty female being born on day 345, weighing in at 25.6 lbs! The average birth weight here is just under 19 lbs, but I think the national average is closer to 15 lbs.

They have 3 stomachs, or more precisely, 3 stomach compartments.  Their stomachs aren't fully developed until they are about 4 months old.

The gestation period of an alpaca is 345-350 days, as a general guideline.  They tend to carry longer in the spring, when the weather is just starting to warm up, and shorter in the fall, as things are cooling off.  I say this is merely a guideline, because here at Sopris Alpaca Farm, they generally deliver on about day 345, but we have seen the gestation vary from as little at 319 days, to as long as 379 days.  We've heard other breeders with animals even outside these outer numbers.

Alpacas are much smaller than llamas.  They typically stand about 35"-38" at the withers, and generally weigh about 150-175 lbs.  Again, this varies.  We have adult alpacas ranging in weight from 110 lbs to large, mature males weighing 225 lbs.

Adult huacaya alpacas will shear 5-15 lbs of fleece annually.  These numbers are on the rise, as a lot of alpaca breeders are breeding for more fleece.

I guess you can't have a page about alpaca facts without mentioning their nutrition.  Alpacas are very easy keepers, only eating about 1.5 - 2% of their body weight in grass of hay each day. So an alpaca weighing 150 lbs only needs 2-3 lbs per day of grass or grass hay.

Many alpaca breeders supplement their alpaca's diets with pellets,  and/or free choice minerals, both  formulated for alpacas